Figures and new prospects in the olive oil market

Olive oil production estimates for vintage year 2019/2020 indicate widely different results, depending on which country you are looking at: in fact, forecasts hint at a significant decline in Spain, record figures for Portugal and Tunisia, and good results for Italy and Greece.

Olive growers are confronted with the effects of climate change: while some regions have been affected by drought, growers were forced to harvest early in other areas.

Luckily enough, the overall outlook for growers is positive. A recent study by Hexa Research showed that there are great prospects for growth. In 2017, the worth of the olive oil market was estimated at around 7 billion euro, and it expected to grow steadily to hit the 10 billion euro mark in 2025.

This trend has continued over the last 25 years, leading to a 73% increase in global oil consumption (with peaks as high as 250% in the United States).

Expert knowledge and attention to quality

Consumers are becoming increasingly attentive to their diet and this change of attitude has increased demand for healthy products to be used as an alternative to other types of oil that are considered of lower quality.

In addition to the food industry, there is a growing demand for olive oil as an ingredient in personal care products, such as skin and hair products.

According to the study carried out by Hexa Research, the most popular product will still bevirgin olive oil, which dominated the segment in 2017 accounting for more than 70% of total revenues – and the market share is expected to grow further. Use as a food or food ingredient continues to account for the largest share of the market (more than 85% of the total in 2017).

The European market remains the largest oil market at over 60%, with Spain, Italy and Greece taking the leading positions among producers and exporters. Other major producers include countries in the Mediterranean basin, the area where olive cultivation originated, in particular Tunisia, Turkey, Syria and Morocco.

Growth is also expected in Asian countries, where consumers are becoming more demanding and there is a growing awareness of the importance of healthy foods. More specifically, spending per person has been growing significantly in India and China as well, and the latter is becoming one of the most important export destinations.

Figures for the olive oil market

The figures from a report published by the European Commission are clear – Europe stills leads the chart in terms of production, thanks to its thousand-year old tradition and the pivotal importance of the Mediterranean diet, in which olive oil is the essential ingredient, a must-have in every pantry.

Within Europe, worth noting is the clear predominance of Spain, which alone accounts for between 60% and 70% of European production – and half of world production in the most abundant years. While Italy and Greece compete for second place, Portugal finishes fourth.

Outside Europe, the leading producers are 4 countries bordering the Mediterranean Sea: Tunisia, Turkey, Morocco and Syria together account for between 60% and 70% of non-European production.

Figures for the olive oil trade

Unsurprisingly, olive oil is consumed mainly in the largest producer countries, although ranking by consumption is slightly different. As a matter of fact, according to a 2014 research study, Greece holds the record for consumption per person, at an average 12.8 kg per person a year. France and Spain follow with 11.3 and 10.5 kg, respectively, while Portugal’s average consumption is as low as 7.2 kg.

Nor it is surprising that export figures are essentially in line with production, with Spain clearly in the lead, followed by Italy, Greece and Portugal. 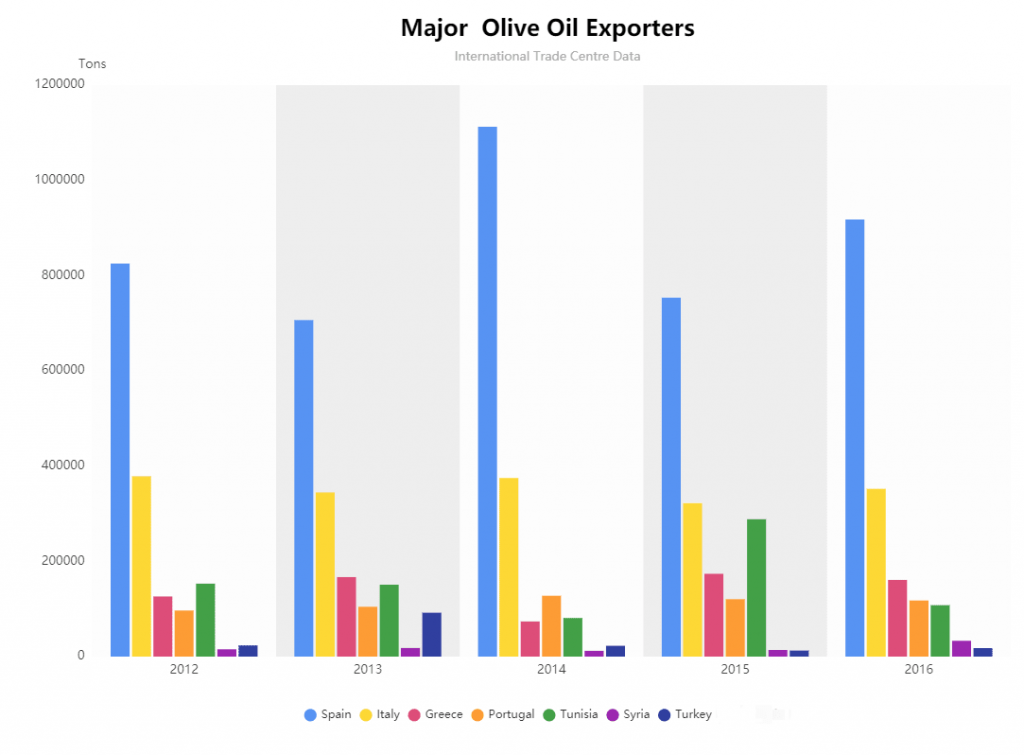 As a little final observation, it may come as a surprise that the two largest producers are also the largest olive oil importers – Spain and Italy. In fact, Spain imports olive oil mainly from Greece, whereas Italy imports it mainly from Spain. Other major importers are the United States, Russia and Germany.

Working in olive groves requires reliable tractors that are easy to operate, the right size to drive between rows and offer a versatile hydraulic system to manage all necessary operations. That is why we at Landini offer a range of orchard tractors designed specifically for olive groves and orchards.