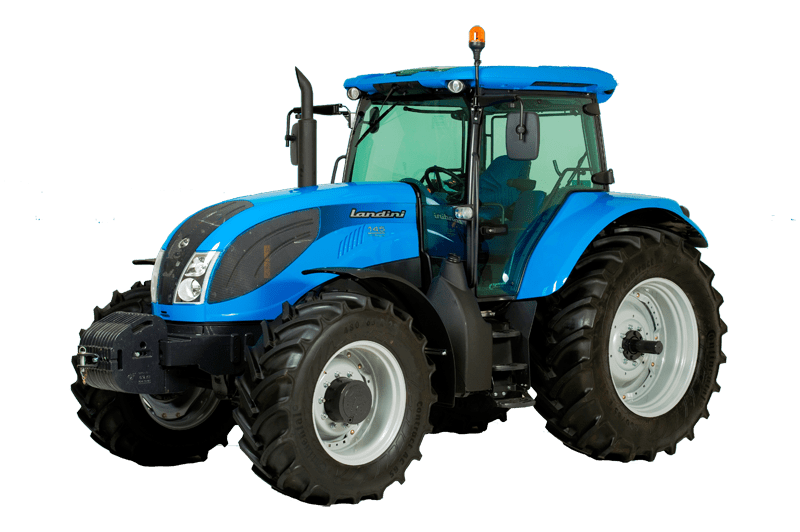 Sima 2013. A strategic appointment of international proportions for Landini as it takes the opportunity to offer an increasingly more global glimpse of the intensive work project that will occupy the next two years.
Backed by a well-established “Made in Italy” policy, Landini continues its unceasing product development process with great attention to both the European and non-European markets.

The new 5D Tier 4 Interim Series is one of the innovations presented by Landini at Sima 2013, in a range that comprises three models, 90-100 and 110, with 85 to 102 HP power ratings. In this case, the machines feature innovative Perkins Tier 4 Interim 2-valve Common Rail engines, while Powerfarm tractors with Tier 3A engines will still be available for the non-European markets.
The new 5D series, whose design heralds the pioneering family feeling of all the future Landini tractor ranges, is available in the Standard and HC versions and is an extremely versatile choice for use in all crop-growing activities.
Compared to Powerfarm, from which the new range derives, the 5D series acquires four important innovations:
1) Spring On / Pressure Off 4WD engagement
2) Overdrive as part of the standard equipment, thus 24 forward and 12 reverse speeds plus an optional creeper (no longer as an alternative) for a total 32 + 16 speeds.
3) Rear power lift with optimized controls, operated in cab by E.L.S. system (Ergonomic Lift System) and an optional external control lever.
4) New cab interiors aligned to 5H models.

And it’s the 5H Series, also on show in Paris, that introduces the new Perkins Common Rail Tier 4 Interim engines equipped with the new Dual Power system.
The TOP version of models 90-100-110 has an extra power function handled by the transmission unit for PTO operations (up to 113 HP engine power in model 5-110H).
Common Rail engines again for the Techno models, but without Dual Power.
The TOP version has a hydraulic reverse shuttle and electro-hydraulic PTO, while Techno features a mechanical reverse shuttle and electro-hydraulic PTO. Here again, a re-vamped design reflects the innovative Landini family feeling.
Meanwhile, the cab interior has been renewed with important improvements to ergonomics and to the overall comfort provided by these tractors.

Lastly, after restyling the Landpower Techno series, Landini is now introducing the restyled Landpower Comfort version. Tractors complete with electro-hydraulic reverse shuttle, 3 speeds, electronically controlled power lift and the new 4-pillar cab, generously sized, more comfortable and with ergonomic improvements. The restyling process is now complete and underscores the overall high-level comfort provided by this range to an even higher extent.
Restyling imposed by growing desires for comfort and by the increasing popularity enjoyed by the Landpower range in all markets, including the non-European ones.

Argo Tractors, with its headquarters in Fabbrico (Reggio Emilia), manufactures tractors under the Landini, McCormick and Valpadana brands and belongs to the Argo Industrial Group. Argo Tractors SpA has tripled its production volumes in little more than 10 years, with a remarkable growth in concrete results: the group turnover amounts to 500 million Euros. The enterprise numbers 1,600 employees and has 4 manufacturing plants, 8 business branches in various parts of the world, 130 overseas importers and 2,500 dealers. Statistics that have allowed the Landini, McCormick and Valpadana brands to achieve a significant standing in the domestic tractor market and to represent one of the most important international players, thus confirming the value of a successful group strategy.