A Kent fruit and hops grower is using a well-known arable cultivation technique in an attempt to maintain control of troublesome weeds as herbicide options diminish.

Josh Berry used a short disc cultivator for the first time this year at Gushmere Court Farm near Selling in the hope of controlling both annual and perennial weeds.

The implement has two rows of aggressive discs set at an angle to cultivate the soil and dislodge weeds to keep them at bay during the growing season.

A key attraction of the implement is its hydraulically-adjustable working width, which means it can be adapted to operate in blackcurrant orchards and hop gardens planted at different spacings.

“There’s resurgence in the hops market thanks to the growth of craft brewing so we want to maximise yield and quality,” says Mr Berry. “But it’s a very specialist crop so the herbicides we’re permitted to use are becoming fewer all the time, which is why we’re looking at being more effective with cultural methods.” 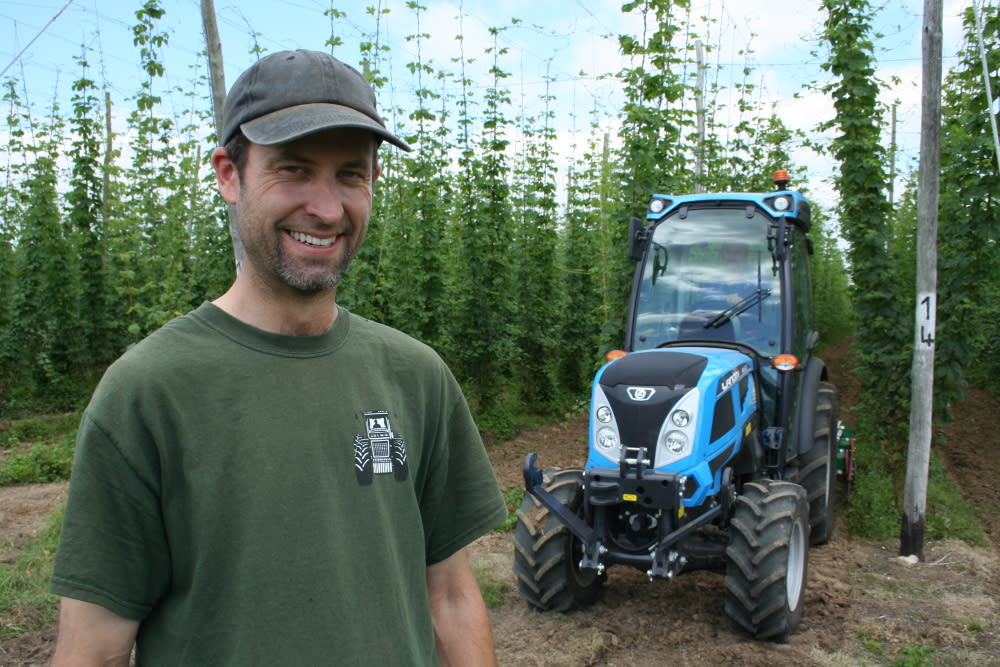 Josh Berry with the new Landini 4-100V: “I went for the top spec to get the best performance in different applications but also, I think it’s important for our hard-working operators to have the best possible equipment.”

Operating the small-scale but heavy-duty Ovlac Minivid Pro cultivator was one of the first jobs given to a new tractor on the farm.

The 95hp Landini Rex 4-100V supplied by local dealer Horsepower UK is an ultra-narrow tractor that nonetheless has the power, strength and rear lift muscle to handle the implement.

“We specified larger diameter discs on the cultivator to ensure penetration into hard, dry soils through the summer, so it’s quite a heavy implement for its size,” says Josh Berry. “The hydraulically-operated telescopic frame also adds weight but it’s ideal when we’ve one hop garden at 2.1m plant spacing and another at 2.4m.”

Although the trio of earlier Landini Rex tractors on the farm are to the ‘F’ specification suited to working in the farm’s blackcurrant, pear and cherry orchards, the narrower ‘V’ configuration was chosen for the new-generation Rex 4-100 to ensure it can work down the rows as the hops grow and the bines sag. 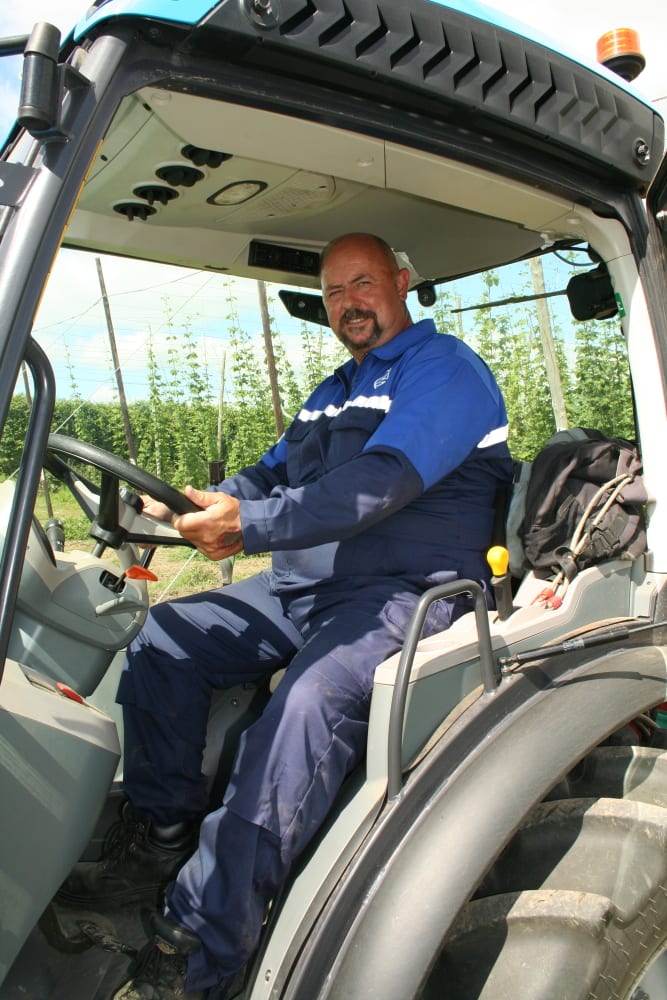 Yet operator Daryl Rook says the cab is spacious enough despite the narrow width, with the new smooth, slightly curved floor being a big improvement on the ‘straddle’ seating position of other orchard and vineyard tractors.

“Instead of being forced to always have your legs in one position, you can move them to different positions to stay comfortable throughout the day,” he points out. “The seat is positioned a bit higher, and together with the taller windscreen, that gives you better forwards visibility.”

This is an important consideration for operations at Gushmere Court where the tractor is equipped with front lift and pto to operate a pruning machine and a pulveriser so that the operator has the best view for maximum accuracy and control.

“I specified relatively small front wheels for maximum steering manoeuvrability, especially to avoid damaging the blackcurrants when the tractor’s operating our three-row trailed sprayer, but in all other respects went for the top spec,” Josh Berry explains.

The tractor’s new transmission therefore has a power shuttle for easiest changes between forward and reverse, a clutch button on the gear lever for pedal-free shifting, and three-step powershift to get the maximum number of ratios for different applications and easy speed shifts under load.

“The engine speed memory is ideal for headland turns,” says Daryl Rook. “You set one speed for turning and one for working, flick the switch between the two and you always return to the correct pto speed without any fiddling.”

Hydraulic resources are also generous – the tractor is equipped with a 50-litre/min pump to supply a good complement of spool valves to operate increasingly complex machinery like the farm’s new pruning machine.

As for operating the inter-row disc cultivator, the tractor takes it in its stride, says Daryl Rook, and he is hopeful the discing action will provide effective weed control.

“The cultivator’s simple to set up and operate, and it’s easy to use on this new tractor,” he says. “It’s clear that a lot of thought has gone into the Rex 4’s design, especially to make life easier and more productive for the operator.”

See the outfit in action in our video here: https://tinyurl.com/Rex4-cultivation 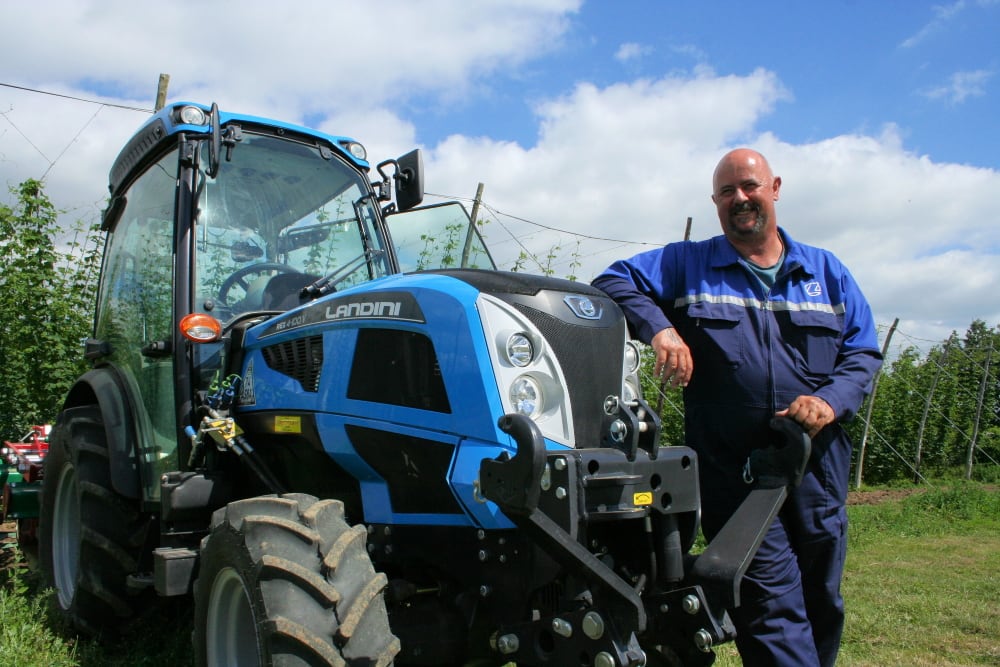 Operator Daryl Rook with his new tractor, which is equipped to operate a front-mounted pruning machine and a pulveriser.