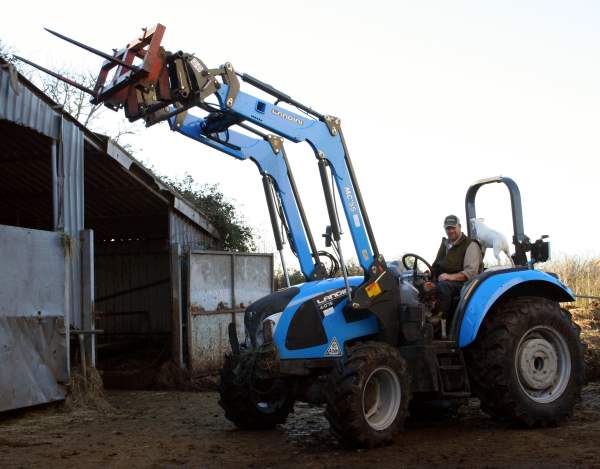 Landini MClassic 55 loader is a good match for the 74hp tractor with its robust front drive axle.


It may not be the ideal tractor on a cold, rainy day but then the open platform Landini 4-075 run by Gerald Venn at Laburnum Farm, Stoke St Gregory in Somerset is mostly used under cover.

The 74hp machine is Mr Venn’s second loader tractor; being relatively small it is very handy for working in and around his cattle yards but is man enough to provide back-up should the more powerful unit break down or when it’s busy on other work.

“I tried out a cab version of the Landini 4 Series, which showed me how nippy the tractor is, but decided on a platform version, partly because it’s so easy to get on and off but mainly for its great all-round visibility,” he explains.

“When you drive a cab tractor with dusty windows out of bright sunshine into a dark shed it’s almost impossible to see at times,” Mr Venn points out. “With a cabless tractor, there’s nothing in the way to stop you having a clear view all round.”

He also has another practical reason for doing without a cab – being able to stop cattle making a bolt for it when entering a yard with a silage or straw bale and no-one but the dog to keep them in.

“With a stick and a lot of shouting from the seat I can usually stop cattle from going past the tractor,” he says. “That’s not possible on a cab tractor unless you have the door open – and then if one does squeeze past it will probably catch the door and break it.”

The tractor supplied last August by Chris Keitch at CJ Keitch Engineering, Dunkeswell near Honiton, has joined a 10-year old Landini Vision that Gerald Venn says is still as tight as new and hasn’t needed so much as a light bulb fixing.

A Landini 1 Series compact tractor is used for yard scraping duties around the cubicle sheds that house the farm’s 70-cow Ruby Devon suckler herd. With the addition of some bought-in calves, the enterprise produces some 250 store cattle a year.

“I did look at another tractor make, because we’re not all Landini here, but although it was attractive in some respects, I wasn’t impressed with the portal front drive axle,” says Mr Venn.

“The Landini’s straight axle looks stronger, which is important for loader work, but the tractor still has good ground clearance and a steering lock that helps the tractor turn very sharply.”

The 4-075 is unusual in being the only Perkins-engined model in the Landini 4 Series; the others have a compact four-cylinder Deutz engine with electronic fuel injection and meets Stage 4/Tier 4 Final emissions requirements.

That makes it a more expensive power unit than the ‘mechanical’ 4.4-litre Perkins built to earlier emissions rules, and price-wise makes the 4-075 an especially attractive package with either two-wheel drive for the ultimate in manoeuvrability or four-wheel drive for optimum traction.

“Four-wheel drive is essential for loader work, of course,” says Gerald Venn. “The larger front tyres and the tractor’s relatively low weight also mean it can work on the peat moor here without leaving much of a trace.”

All Landini 4 Series tractors from 64-76hp come with a choice of transmissions starting with the simple synchro shuttle Speed Four 12×12 configuration, to which two-speed powershift (24×24) and creep (16×16 or 36×36) can be added.

Mr Venn specced his tractor with Speed Four and the Hi-Lo powershift along with a response-adjustable power shuttle for fingertip shunting between forward and reverse. This also brings a clutch button on the joystick for pedal-free speed and shuttle shifting.

Apart from loading and handling work with the Landini MClassic 55 loader, the tractor gets involved with haymaking, operating a 2.4m (8ft) disc mower and a hay turner/rake for which the tractor’s 750rpm pto reduces engine speed to just 1600rpm.

“That makes it more economical and quieter – just the thing for haymaking on a nice sunny day when the lack of a cab means I can top up my tan,” jokes Mr Venn. 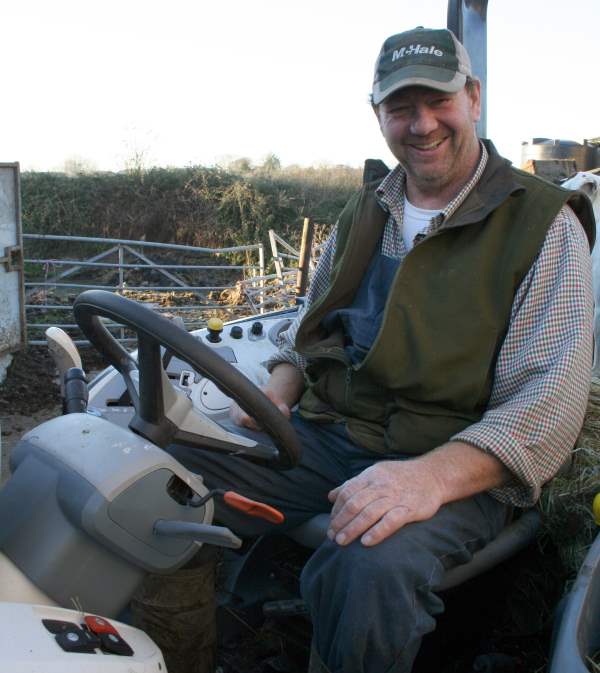 Gerald Venn: “With a cabless tractor, there’s nothing in the way to stop you having a clear view all round.”

Landini MClassic 55 loader is a good match for the 74hp tractor with its robust front drive axle.