Andrew Kneebone "We really need something small and nimble enough for the buildings, but big enough to handle the field work".

Introducing new technologies on tractors is pretty much inevitable when owners are always seeking greater productivity. But on the latest crop of tractors, high-tech equipment under the bonnet is necessary to ensure exhaust emissions are as clean as possible to benefit the environment.

On relatively simple tractors used by livestock farms, the added complexity may be seen as an unwelcome imposition. Devon beef and sheep farmer Andrew Kneebone certainly had misgivings about replacing his familiar Landini tractors with the latest models featuring new emissions technology.

“But my concerns were unfounded; the emissions system doesn’t impact on performance or anything else,” he says. “It’s unobtrusive and the new engine pulls really well; I was a bit dubious but I’m more than pleased with the new tractors.”

Mr Kneebone now runs two of the latest-spec Landini 5-110H tractors at Turchington Farm, a 200-acre all grass property near Launceston, where he and his family run 500 Suffolk and Texel ewes and have a newly-established herd of 25 Hereford cross suckler cows.

The tractors are identical – which makes it easy to jump from one to the other – apart from one having an electronically-operated rear hitch while the other has traditional mechanical controls.

Both are powered by a new compact four-cylinder engine tuned for efficient use of fuel and to minimise the nitrogen oxides that are a product of the combustion process. They also have a particulates filter in the exhaust system to remove excess ‘soot’ – both measures ensure the engine meets tight anti-pollution standards governing off-highway vehicle emissions.

Despite the new engine being smaller than the one it replaced – 3.4 litres versus 4.4 litres – the Perkins unit it produces just as much power and higher levels of torque, the force that enables a tractor to pull ploughs and other soil-engaging implements and tow heavy trailers.

“I was very encouraged when the first of these tractors pulled the horse box up our lane over the brow of the hill in top gear,” says Mr Kneebone. “That seems a silly thing but it’s the first tractor I’ve had that could do it, which shows how much more power and torque there is.”

A ‘power boost’ feature allows the electronically-managed fuel injection system to extract extra performance when the tractor is engaged with a pto-driven implement or is operating in its higher gears on the road.

In those situations, the standard 105hp output increases by 8% to 113hp and the torque goes up by 9%. Yet the new engine has demonstrated up to 8% fuel savings over its predecessor.

“The extra power means you don’t have to change down too much to keep the engine revs up,” Andrew Kneebone points out. “And if the engine doesn’t have to run so fast it’s not using as much diesel.”

Like other tractor engines with a particulates filter, the system periodically burns off any excess deposits – a process called active regeneration. During repeated heavy usage, such as when ploughing, the exhaust gases usually get hot enough to burn off the deposits but a loader tractor’s engine needs a helping hand.

“A light comes on to show that the regeneration process has started,” Mr Kneebone points out. “You can carry on working but I tend to go and do something else while the tractor stands idling for a few minutes so the process can finish quickly; it’s really not intrusive into the daily routine.”

While the farm’s 5-110H equipped with a Landini MClassic 80 loader undertakes bale wrapping and stacking, hay turning and all handling duties, the second tractor powers a mower and round baler for silage, a plough and harrow for grass reseeds, and a trailer, muck spreader and other equipment used through the year.

Both have a power shuttle for quick and easy direction changes, a declutch button on the gear lever that saves always having to use the clutch pedal when shifting, and a new feature that adjusts the clutch response.

“That’s really handy; on older tractors, you had to adapt to how the shuttle works but the modulation control lets you alter the clutch bite,” Andrew Kneebone explains. “I set it quite sharp for quick gear shifts on the road but then ease it back to a softer setting in the yard – and especially for coupling on to a trailer or spreader; it’s nice having that much control.”

Being relatively narrow – wheel settings can get them down to just 2.1m (83in) if necessary – the tractors are very handy in the tight confines of the yard and buildings on the farm.

“We really need something small and nimble enough for the buildings but big enough to handle the field work,” says Andrew Kneebone. “These Landini tractors fit the bill perfectly.”

Andrew Kneebone “We really need something small and nimble enough for the buildings, but big enough to handle the field work”. 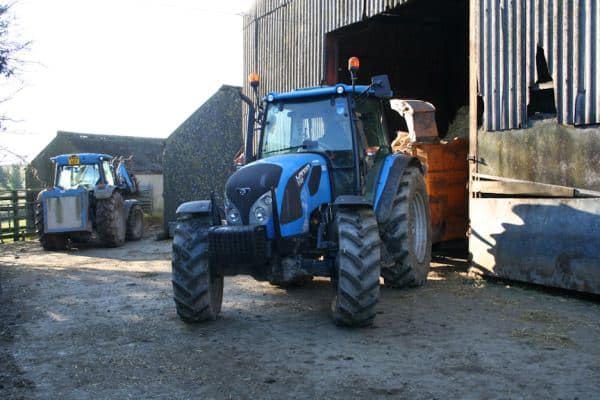 The two Landini 5-110H tractors have to work in and around the tight confines of the buildings at Turchington Farm in Devon.

The new Landini MClassic 80 loader supplied by Cornish Tractors does a good job of mucking out and general handling duties. 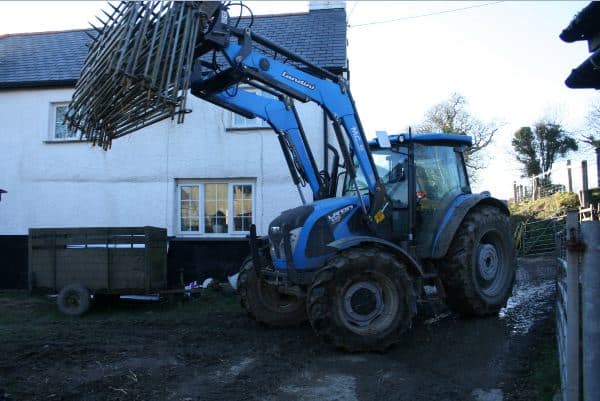