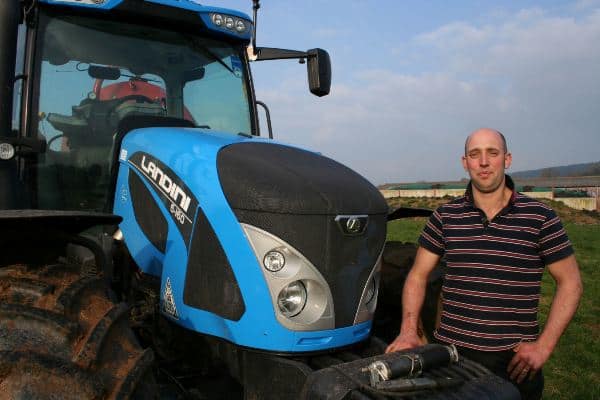 The new Landini 6-160 at Knightstone Farm is one of a new generation of more sophisticated tractors with high tech but practical controls that bring real benefits, says Dave Lawrance.

Tractor owners and operators familiar with levers for gear-shifting and operating hydraulic spool valves don’t always appreciate it when a manufacturer installs ‘high tech’ controls on their new models.

But the dairy team on an east Devon farm has come to enjoy the benefits that modern electronics can deliver.

“Our old Landini Landpower 135 is very much a ‘mechanical’ tractor, with gear levers, lever-operated hydraulics and mechanical fuel injection on the six-cylinder engine,” points out Dave Lawrance at Knightstone Farm, Ottery St Mary. “So when we bought a Landini 6-160 with lots of modern features on it last August, everything was new and very different.”

The 365-acre dairy unit – home to the Knightstone herd of pedigree Holsteins – grows forage maize, wholecrop wheat and grass on mostly light, sandy soils on ‘rolling’ ground with some steepish banks. The business is a family partnership between Mr Lawrance, his wife Vicki and his parents.

“Having expanded the herd to 250 milkers and 180 followers, and taken on another member of staff, we needed a third tractor – and one with a bit more weight and better traction on the banky ground to handle a larger slurry tanker,” explains Mr Lawrance. “But we didn’t want anything too big in case it had to take its turn on the diet feeder.”

Landini tractors have been a regular sight on the farm over the past 20 years but some other familiar makes were given a chance to shine as part of the selection process for the new machine. The Landini 6-160 supplied by Chris Keitch at CJ Keitch Engineering, Dunkeswell, proved not only very well equipped but also the best value and got the nod.

Equipment levels are in stark contrast to the Landpower 135, which has been a remarkably reliable workhorse over the years: “It’s done 9500 hours and apart from routine servicing it’s only had the brakes renewed and some attention to the gearbox to replace a rollpin,” Dave Lawrance points out.

In place of its lever-operated transmission and hydraulics, the new Landini 6-160 has electronically-operated systems controlled using buttons and switches set into a console mounted on the driver’s air suspension seat. With their right hand resting on the fixed joystick, the driver can easily shift up and down the four gears in each range using just their thumb, and make range changes by pressing a second button at the same time.

Another two buttons operate one of the electric hydraulic valves and others are operated using toggle switches that have a proportional action, so the operator can ‘feather’ them just like levers. A roller switch provides quick lift-lower operation of the rear hitch, with adjustments using dials on the console.

“It’s really handy being able to fine tune hydraulic spool valve flow from the seat – to regulate the lift speed of the rotor door on our muck spreader, for example, or to make sure the tailgate lifts out of the way on the silage trailer as it tips,” Mr Lawrance explains. “I also like being able to lock the valves individually to prevent them being used accidentally – grab the wrong lever on the old tractor and you open the muck spreader stone trap instead of lifting the door.”

It took little time to get to grips with the unfamiliar transmission controls, he says, and staff members at both ends of the generation spectrum can handle them: “It’s better to have an electronic system handle shifts when the transmission’s ready than have someone forcing gears in and wearing out the synchromesh,” he suggests.

“The Autopowershift system is really good, especially on the road, with nice smooth changes adding to the comfortable ride and driving experience provided by the cab and front axle suspension,” Mr Lawrance adds.

“I’m also convinced that the front axle suspension helps with traction on our ground,” he says. “The wheels can move independently as well as with the usual axle pivoting movement and that stops the front end from bouncing up and down like you get with a rigid axle.”

The new tractor has a varied workload on the farm, hauling contractor cut silage to the clamp, spreading muck and slurry, ploughing and working down land with a 3m power harrow. A 2500 gallon slurry tanker is one of the more demanding pieces of equipment because of its weight and the movement of slurry inside.

“It was important that the new tractor could handle these jobs more efficiently but also operate the diet feeder around our buildings,” Dave Lawrance emphasises. “The Landini has plenty of power and weight but it’s short enough, low enough and manoeuvrable enough to do it.

“In other words, the tractor is man enough to do all the big jobs out in the field without being cumbersome around the yard,” he concludes. “And the new control technologies are great – take time to understand what they can do and there are real benefits to be had.”

The new Landini 6-160 at Knightstone Farm is one of a new generation of more sophisticated tractors with high tech but practical controls that bring real benefits, says Dave Lawrance. 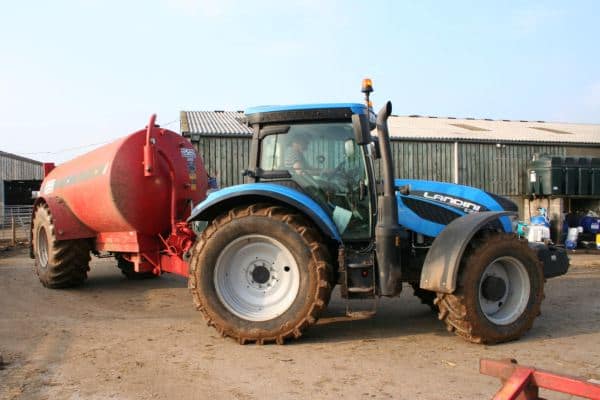 Handling a 2500-gallon slurry tanker is one of the tractor’s main jobs but its manoeuvrable enough to take a turn on the diet feeder if necessary. 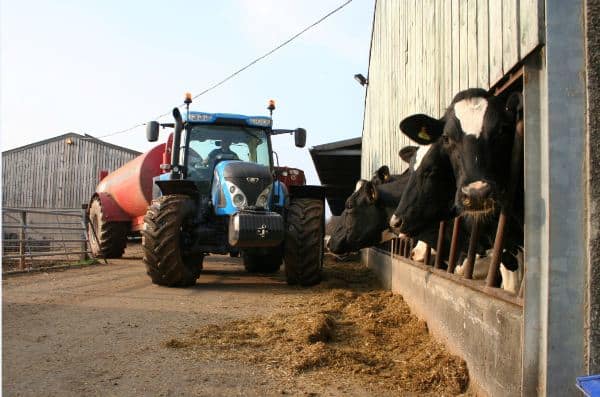 Front axle and cab suspension, as well as an air-suspended seat, give the new Landini 6-160 a comfortable ride making long days less tiring for the driver.